Who is stronger Son Goku vs Vegeta

Dragon Ball Z is definitely one of the most popular anime shows for the past 30 years. The comparison of the two Saiyans in the show Son Goku and Vegeta to see who is stronger and more powerful has always been a hot topic.  Goku fans would argue that Goku is stronger because he has reached Super Saiyan 3 form which Vegeta didn’t. Vegeta fans would say that Vegeta surpassed Goku by achieving a new form, Super Saiyan Blue 2 when he pushed his limits and went beyond Super Saiyan. Now let’s take a closer comparison from a comprehensive perspective.

At their first fight, while Vegeta came to Earth trying to destroy it, Goku defeated Vegeta. But Goku only won the fight because he got help from Krillin and Gohan, Vegeta couldn’t have lost it if he had the chance to fight Goku one-on-one. So we can tell that, when Goku and Vegeta first met, Vegeta was more powerful than Goku. After the first fight, both Goku and Vegeta had went through more trainings and growth. The rivalry between Goku and Vegeta continues throughout the whole series.

Who is more powerful throughout the whole show?

When asked who is more powerful in the whole series, Goku is definitely the winner. Because Goku has been the warrior to beat some of the most powerful enemies while Vegeta however failed to achieve. To be fair, in the beginning Vegeta was surely more powerful than Goku. But as the anime show progresses, we can tell that Goku has always been one step ahead in terms of power upgrade. Goku unlocked the Super Saiyan form way before Vegeta and he even upgraded to Super Saiyan 3 form while Vegeta didn’t even aware of its existence.

Who is a better fighter?

Though Vegeta doesn’t have as much power as Goku, he surely knows how to fight better than Goku. Vegeta’s fighting skills outperform Goku’s not only in techniques but also in strategies. If we recall their fight during the Majin Buu saga, Vegeta won because he was the better fighter, not because he was more powerful. The reason to this is probably that Goku was trained by martial arts masters while Vetega was trained by Saiyan warriors.

Who has better attacks?

Although both Goku and Vegeta have powerful attacks, Goku acquired his attacks mostly by learning or copying from his allies or other warriors.  For example, Goku learned the Kamehameha attack after seeing it performed by others. On the other hand, most of Vegeta’s signature attacks like Galick Gun, Big Bang attack are invented by his own. So we can say that while their attacks are roughly at the same level, Vegeta is much more creative in terms of developing his fighting moves.

From all of the points mentioned above, we get a conclusion that Goku is stronger than Vegeta in terms of power boosts and transformations. However, Vegeta is much better in fighting skills and attack creation. Due to this balance, we have enjoyed watching the rivalry between Goku and Vegeta throughout the show. The good news is whether you are a Goku fan or Vegeta fan, our store offers some cool Son Goku and Vegeta action figures with high quality and affordable prices.  Please feel free to check our Dragon Ball Z action figures section and let us know if you like them.

Below is an interesting video which talks about this topic, enjoy and let us know your thought. 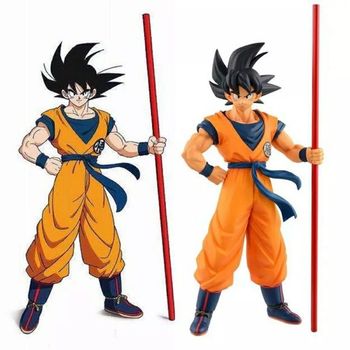 Dragon Ball Z workout shirts have always been one of the most loved merchandise for Dragon Ball Z fans. They give DBZ fans a chance to express their interest and show off their style. Nowadays, with the rising trend of wearing compression clothing during workout, the demand for DBZ compression...

Merry Christmas and Happy New Year from DBZHub.com with 10% discount!

Dear Customers and Friends, DBZHub.com is an online shop for Dragon Ball Z merchandise including Dragon Ball Z action figures, toys, t-shirts, hoodies and accessories. We are very happy to have served over 3000 satisfied customers from around the world in 2019. At this exciting moment, We’d like to express...

Read More
Stay up to date
Register now to get updates on promotions and coupons.